Alzheimer's disease is a chronic and incurable neurological disorder responsible for most cases of dementia. Eventually it progresses to personality changes, deterioration of intellectual function, problems with speech and language, coma, and death. The Alzheimer’s Association estimates that more than 5 million people in the United States have the disease and the prevalence is expected to triple over
the next 40 years.

Diabetes, a disorder characterized by high levels of blood sugar, increases the risk of developing Alzheimer's disease. When blood
sugar levels are high, excessive amounts of advanced glycosylation
end products (AGEs) and free radicals are formed. Free radicals are unstable molecules missing an electron and they readily react with other molecules in order to gain one, causing a chain reaction that triggers inflammation and cell damage. Free radicals and inflammation can also cause injury to the lining of blood vessels, initiating atherosclerosis and increasing the risk for stroke (death of brain tissue).

Alzheimer’s disease is characterized by the presence of amyloid plaques and neurofibrillary tangles in the brain. Plaques are made up of dead and damaged cells and protein deposits which become bunched and tangled together. AGEs have been found in these plaques and tangles.

A study published last year in the journal Neurology followed 135 people for 10 to 15 years, measuring levels of blood glucose and insulin, testing for insulin resistance, and monitoring for symptoms of Alzheimer’s disease. After participants died, the researchers examined their brains. They found that high levels of blood sugar and insulin were associated with an increased risk for developing Alzheimer’s disease, independent of age, sex, body-mass index, smoking, exercise, blood pressure, cholesterol, and cerebrovascular disease. People with the highest levels of insulin had six times the risk of developing brain plaques compared to those with the lowest levels.

In a study published in Lancet Neurology, researchers at the University of California, San Francisco found that up to half of all cases of Alzheimer’s disease could be prevented through modifiable risk factors. These include stopping smoking, being physically active, and treating other chronic illnesses including obesity, high blood pressure, and diabetes.

Matsuzaki, T et al. 2010. Insulin resistance is associated with the pathology of Alzheimer disease. The Hisayama Study. Neurology 75(9):764-70.
Posted by Dr. Sarah Cimperman, ND at September 25, 2011 No comments:
Email ThisBlogThis!Share to TwitterShare to FacebookShare to Pinterest

My Weekly Walk in Central Park

On a cloudy day this week, the Conservatory Garden was quite quiet. 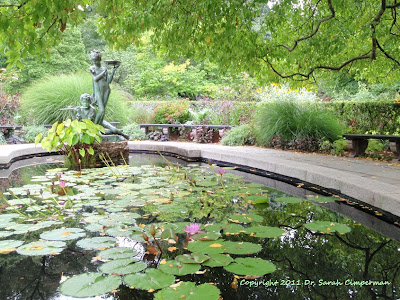 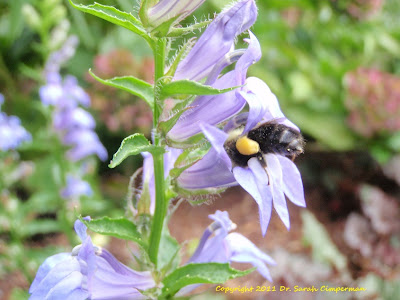 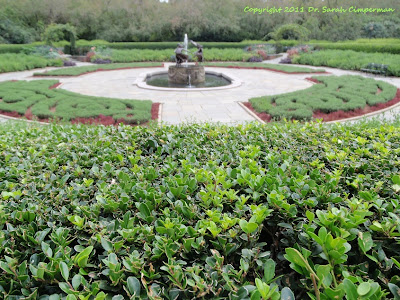 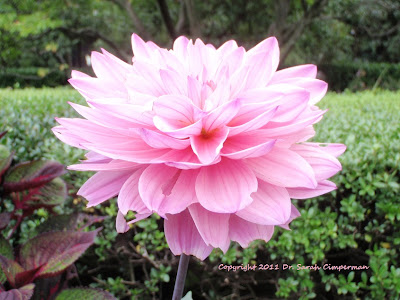 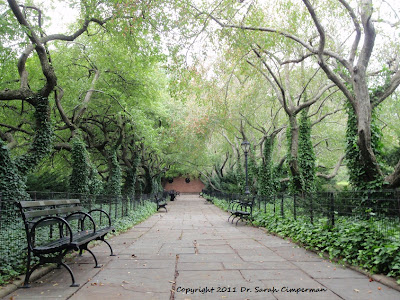 Posted by Dr. Sarah Cimperman, ND at September 24, 2011 No comments:
Email ThisBlogThis!Share to TwitterShare to FacebookShare to Pinterest 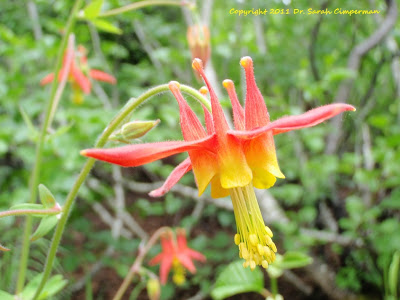 I live just a few blocks from Central Park and I usually walk there weekly. Sometimes I traverse the Great Hill on my way to the farmer's market, when I can spare an hour in the morning. Other times I loop around the Reservoir or the Harlem Meer. If I have more time, I stroll through the Conservatory Garden, my favorite piece of the park.

Walking is an especially good form of exercise because it's aerobic, weight bearing, and easier on joints than running (swimming is even better in this regard). It's a work-out for your whole body, including your heart and blood vessels, and your muscles and bones.

Walking in a forest or park is even better because green outdoor spaces have health benefits of their own. Studies have documented that spending time in nature can reduce stress, lower blood sugar, improve concentration, diminish pain and boost immunity. It can even have anti-cancer effects.

This fall has been especially busy for me, and I've been letting my weekly walk slip. I was recently reminded how important it is to take time for yourself, and to do things that bring you joy and keep you active. So this week I made a new resolution to go for a walk in the park at least once each week.

Now I'm reminding you to take time for yourself.

You don't need to wait until the New Year to make healthy changes. As a time of transition, fall is the perfect opportunity to re-evaluate your goals and your daily activities, and make positive changes happen. 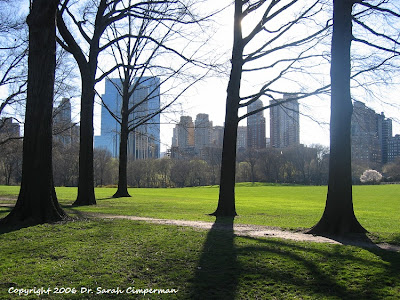 Posted by Dr. Sarah Cimperman, ND at September 18, 2011 No comments:
Email ThisBlogThis!Share to TwitterShare to FacebookShare to Pinterest 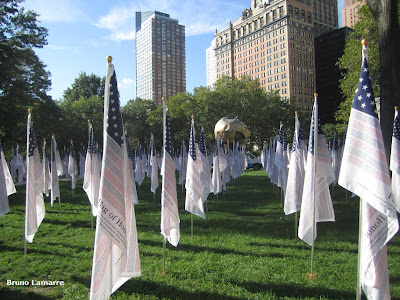 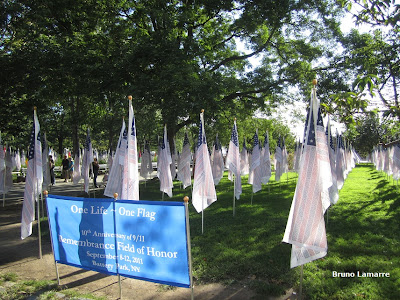 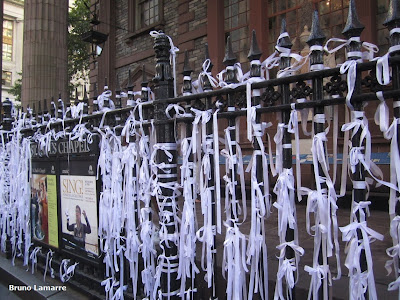 After the attack on the World Trade Center in lower Manhattan
on September 11th, 2001, more than 50,000 rescue workers were exposed to dangerous chemicals that have been linked to health problems like asthma and cancer.

Environmental toxins are a growing concern for everyone as the evidence mounts against them. Even everyday, low-level exposure to chemicals in food, air, furnishings, personal products and household items can cause chronic illness.

These dangerous chemicals aren’t just in our environment, they’re already inside our bodies. According to the Cancer Prevention Coalition, residues of more than 400 environmental toxins have been identified in human blood and fat tissue. And when the CDC measured chemicals in blood and urine as part of the National Health and Nutrition Examination Survey, scientists found toxic compounds in every single sample.

Babies are even born “pre-polluted” according to a study by the Environmental Working Group. They found 287 environmental toxins in umbilical cord blood from babies born in US hospitals in 2004.

We may not be able to avoid exposure to dangerous chemicals in the environment, but we can eat foods that help the liver eliminate them from our bodies:

Eat at least one of these vegetables every day.

Because broccoli, spinach, kale and collard greens are among the most contaminated produce items, eat only the organic varieties. Cabbage, on the other hand, is one of the least contaminated vegetables, making it a good choice when you can't eat organic.

And ask your naturopathic doctor if a detoxification program would be appropriate for you.

Crinnion WJ. The CDC fourth national report on human exposure to environmental chemicals: what it tells us about our toxic burden and how it assist environmental medicine physicians. Alternative Medicine Review. 2010 Jul;15(2):101-9. 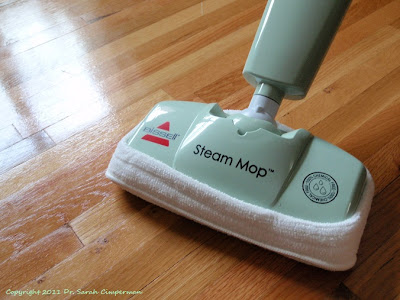 I've been getting questions about chemical-free cleaning, so I wanted to share my favorite mop.

Steam mops clean with just water, steam and reusable, washable pads. What I really like is what's missing: There are no cleaning solutions to add, no batteries to replace, no pads to throw away, and no residues left behind.

This mop gets my hardwood and tile floors cleaner than any other mop I've used, and the swivel head makes it easy to clean hard-to-reach places.

Steam mops are especially good for people with allergies and homes with children or pets who spend time close to the floor.

And ultimately, minimizing our exposure to cleaning chemicals is good for everyone. 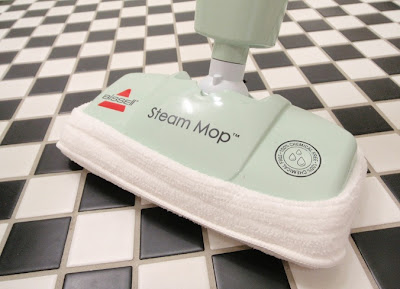