Gratitude is Good For You 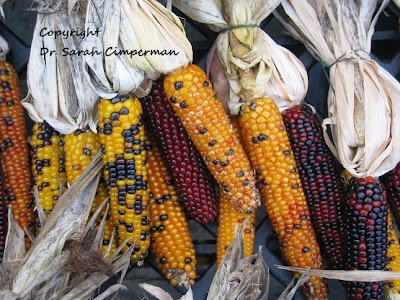 This Thanksgiving, take time to be grateful. It's not just a nice holiday tradition. It can actually improve your health.

Researchers at the University of California, Davis analyzed the effects of gratitude in a series of studies. In the first, participants were asked to keep a weekly journal and write about five events from the previous week. They were randomly assigned to one of three groups. One group wrote about things they were grateful for. Another group wrote about hassles they experienced. The last group wasn't given any direction on choosing positive or negative events.

Read more »
Posted by Dr. Sarah Cimperman, ND at November 24, 2013 No comments:
Email ThisBlogThis!Share to TwitterShare to FacebookShare to Pinterest

Yoga For Colds and Flu

This cold and flu season, fight infections with yoga and meditation.
New research from Norway found that practicing yoga and meditation can cause quick changes in immunity. Study participants engaged in activities for 2 hours each morning on 4 consecutive days. One group practiced yoga postures, breathing exercises, and meditation while the other group listened to relaxing music and went on a nature walk. Every person participated in each group twice.

Read more »
Posted by Dr. Sarah Cimperman, ND at November 17, 2013 No comments:
Email ThisBlogThis!Share to TwitterShare to FacebookShare to Pinterest 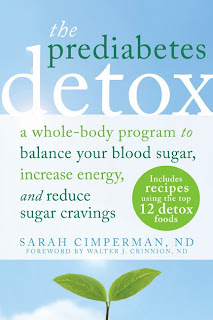 Prediabetes is a worldwide epidemic and in the United States alone it affects 79 million people, or 1 in 3 adults and nearly 1 in 4 adolescents.

Characterized by high levels of blood sugar and insulin, prediabetes increases the risk of 5 of the 7 leading causes death in the US including type two diabetes, heart disease, stroke, Alzheimer’s disease, and cancer.

Fortunately, the condition is reversible and personal changes are the best prescription. A landmark study published in the New England Journal of Medicine found that changes in diet and lifestyle reduced the risk of diabetes almost twice as much as the diabetes drug Glucophage (metformin) and that the benefits were still apparent a decade later.

While diet and exercise changes are essential, there’s another piece to the puzzle. Now that research studies have linked toxic chemicals in the environment to an increased risk of developing diabetes, it’s time to recognize detoxification as an important part of permanently reversing prediabetes.

Toxins are chemicals in the environment that are harmful to our health. Most of the time, we can’t see or smell or taste them, but toxins are very real and we’re exposed to them every day. These chemicals aren’t only in the environment; they’re already inside our bodies. Almost 500 different chemicals have been found in human blood and fat tissue and studies show that the older we get, the more toxins we contain.

Chemicals that increase risk of developing diabetes are called diabetogens. Since 1999 the National Center for Health Statistics, part of the Centers for Disease Control and Prevention, has measured chemicals in the blood and urine of people taking part in the National Health and Nutrition Examination Survey. The most recent report found diabetogens in every single sample.

That’s right: 100 percent of the 2,500 people studied tested positive for toxins that have been shown to increase the risk of diabetes.

These chemicals promote the development of diabetes through several different (and sometimes multiple) mechanisms. They may raise blood sugar levels or interfere with the ability of cells to use glucose in the blood. They may damage cells including those that produce insulin in the pancreas.They may act as endocrine disruptors, mimicking hormones made by our bodies, blocking hormone receptors, raising insulin levels, and promoting insulin resistance. Some can even influence the expression of genes that regulate metabolism, turning them on and off.


Dioxins like PCBs (polychlorinated biphenyls) are produced by a variety of industrial processes and once they’re released into the environment, they contaminate soil and waterways and accumulate in drinking water and food. The greatest source for most people is contaminated fish and seafood and the highest concentrations are found in large predators living at the top of the food chain.

BPA and phthalates are found in plastics. They’re used to make water bottles, baby bottles, pizza boxes, plastic wrap, epoxy linings inside food and beverage cans, and plastic and polystyrene (StyrofoamTM) cups, takeout containers, and egg cartons. These chemicals also have multiple industrial uses. Along with phthalates, parabens are found in personal products like shampoo, deodorant, and lotion. Parabens are the most widely used preservatives in cosmetics and they are also used to make certain food additives and prescription drugs.

Brominated flame retardants are added to furniture, electronic equipment, mattresses, and clothing. Because they don’t break down easily, they’ve become persistent and widespread in the environment.

Volatile organic compounds are chemicals used in manufacturing. They escape in the form of gases from building materials, office equipment, furnishings, household cleaners, and fragranced products like air fresheners and scented candles. According to the EPA, VOCs are up to ten times more concentrated in indoor air than in outdoor air.

Every year in the US we apply five billion pounds of pesticides to our crops. They soak into the soil where they’re taken up into plants through their root systems and distributed throughout, so we can’t just wash them off. Agricultural run-off that pollutes waterways causes pesticides to accumulate in drinking water and fish.

Heavy metals enter our diet primarily through drinking water, fish and seafood, and fruits and vegetables sprayed with herbicides or grown in contaminated soil. We can also be exposed to heavy metals from many other sources including antiseptics, dental amalgams, and cigarette smoke.

Whether we realize it or not, we come into contact with these chemicals every day and they can cause problems even in small doses well below acceptable levels set by the Environmental Protection Agency. Most toxins are fat-soluble and stored inside fat cells, although heavy metals can also accumulate in bones and organs (primarily the kidneys, liver, intestines, and brain) where their half-lives are measured in decades.

We’ll never be able to escape environmental toxins completely, but we can take steps to minimize our exposure and remove them from our bodies through detoxification.

A comprehensive detox program should promote the release of toxins from their storage sites and support the liver in changing them into water-soluble compounds that the body can easily excrete. This can be accomplished with a diet low in sweets and starches, regular exercise, stress management, good sleep, sauna therapy, and supplements that deliver the vitamins, minerals, antioxidants, and amino acids needed for detoxification.

If you’re interested in detox, see your naturopathic doctor for an individualized protocol or read my new book, The Prediabetes Detox: A Whole-Body Program to Balance Your Blood Sugar, Increase Energy, and Reduce Sugar Cravings.

Alonso-Magdalena P, Quesada I, and Nadal A. 2011. Endocrine disruptors in the etiology of type 2 diabetes mellitus. Nature Reviews, Endocrinology 7(6):346-53.

Posted by Dr. Sarah Cimperman, ND at November 10, 2013 No comments:
Email ThisBlogThis!Share to TwitterShare to FacebookShare to Pinterest 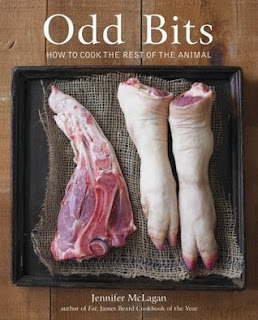 In Odd Bits: How to Cook the Rest of the Animal, Jennifer McLagan encourages us to use the whole animal. She reminds us about all the parts we forget about in favor of the few prime cuts found on supermarket shelves.

Boudin Noir is also known as blood sausage and I was first introduced to it by my husband's family on the Caribbean island of Martinique. I was a vegetarian at the time, just starting to incorporate some seafood into my diet, but I wasn't eating meat. I didn't really know what boudin noir was, just that there was no meat inside, and never did I imagine it was made with blood. It's a good thing I didn't know because at the time it would have prevented me from trying it, and it was love at first bite.

I don't get the chance to eat boudin noir very often, but I do whenever I can. It's a popular dish in several cultures and every family has their own recipe. I've tasted it in many different countries but I've never better boudin noir than what we eat in Martinique, where it's made with a hint of cinnamon and it's soft enough to squeeze out of the casing. Now I'm excited to try making my own.