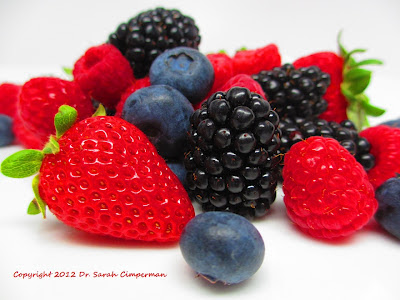 Diet can help determine the effects that the sun has on our skin.

Studies show that certain compounds found in fruits, vegetables, green tea, and herbs can protect skin against damage from the sun's ultraviolet radiation without interfering with vitamin D production.

These compounds have anti-inflammatory and antioxidant effects and they modulate the immune system, helping to prevent cancerous changes. They also turn on genes that repair mutations in DNA.

Sun-protective compounds include vitamin C, vitamin E, flavonoids, ellagic acid, and carotenoids like beta-carotene, lycopene, and lutein. Find them in:


Making these foods a regular part of your diet will give you some natural defense against the sun, but it won't protect you completely. It's still important to stay out of the sun, especially mid-day when the rays are most intense, and use sunscreen liberally (apply 2 or 3 tablespoons of SPF 30 or higher every 2 hours).

If you do end up with a sun burn, foods can also be used to sooth and hydrate inflamed skin. Apply organic whole milk yogurt to affected areas or soak in an oatmeal bath. (Add a cup or more of dry oats to a sock and run your bathwater through it.) 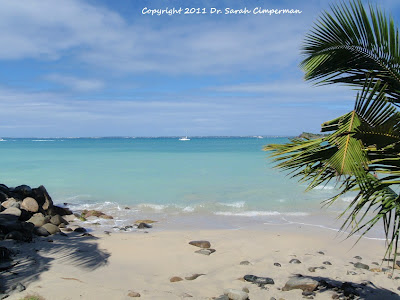 Dinkova-Kostova AT. 2008. Phytochemicals as protectors against ultraviolet radiation: versatility of effects and mechanisms. Planta Medica 74(13):1548-59.

Posted by Dr. Sarah Cimperman, ND at July 29, 2012 No comments:
Email ThisBlogThis!Share to TwitterShare to FacebookShare to Pinterest 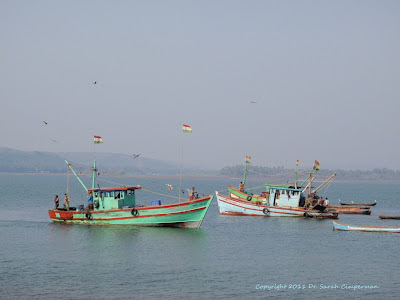 Fish and seafood are critical for good health because they contain two essential omega-3s that we don’t get anywhere else in our diet: docosahexaenoic acid (DHA) and eicosapentaenoic acid (EPA). These two irreplaceable fats are only found in substantial amounts in fish and marine animals.

Technically, they’re also found in algae – which is why the fish that eat them are such good sources themselves – but the edible varieties don’t contain enough DHA and EPA to meet human needs. Nori and hijiki contain such miniscule amounts that their nutrition labels report zero grams of fat.

It’s also true that the liver can convert other omega-3s (like ALA) to DHA and EPA but some people don’t make the enzyme necessary for the reaction (delta-6-desaturase) and according to research studies, the process is “unreliable” and “severely restricted.”

So we have to get these essential fats from fish or fish oil. People who don't eat non-toxic fish and seafood daily often benefit from supplementation. But fish oil supplements aren't all created equal.

Because so many species of fish and seafood are now contaminated with toxic environmental chemicals, the quality of fish oil is extremely important. While there are no standards for fish oil quality in the United States, international standards do exist. The Norwegian Medicinal Standard (NMS) and the European Pharmacopoeia Standard (EPS) both set maximum allowances for heavy metals, dioxins, PCBs, and peroxides.

It's also important to consider the source of fish oil. Over- harvesting and other harmful fishing practices threaten the environment as well as the future of fish and seafood. Use your power as a consumer to support companies that only use sustainably harvest fish to make their products.

When you're shopping for fish oil, look for products that meet these criteria:


In my practice I often recommend Nordic Naturals products because they meet and even exceed these criteria (their fish oil is tested by independent laboratories for more than 200 environmental toxins). Their products have also been chosen for clinical trials at the National Institutes of Health, Stanford, and UCLA (University of California, Los Angeles).

Fish oil can be taken as a liquid or soft gels (capsules). Liquids are usually less expensive because you’re not paying for encapsulation. And because there's no capsule, they're usually easier to swallow and digest. Depending on the concentration of the oil, you may have to take 8 capsules to get the same amount of DHA and EPA in a teaspoon and a half of liquid fish oil.

Whether you choose liquid or capsules, ALWAYS keep fish oil in the fridge. The fragile unsaturated fatty acids in fish oil easily oxidize in the presence of light and warmer (room) temperatures. Capsules can even be kept in the freezer and swallowed frozen.

Some of my patients report a fishy after-taste, but this problem is usually solved by taking frozen fish oil capsules at the very beginning of meals. Long term use of fish oil can deplete vitamin E, so small amounts of vitamin E are often added to fish oils. Individuals who are allergic to fish or seafood should avoid fish oil.
Posted by Dr. Sarah Cimperman, ND at July 22, 2012 No comments:
Email ThisBlogThis!Share to TwitterShare to FacebookShare to Pinterest

If You Eat Cilantro 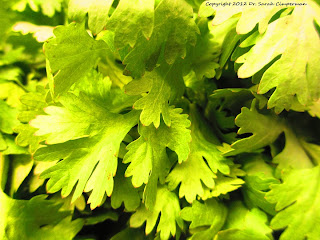 Fresh cilantro is one of my favorite flavors of summer.

But if it's not organic, it may be dangerously contaminated with pesticides, according to the most recent report from the US Department of Agriculture.

The USDA routinely tests produce for pesticides and their latest analysis included cilantro for the first time. Researchers tested 184 samples, both domestic (81%) and foreign, for 43 different pesticides. The results were shocking:


Even though cilantro isn't on the Dirty Dozen Plus list, you should still avoid it if it's not organic.

If you can’t find organic cilantro at your farmer’s market or in stores, plant some in your garden or grow it in a pot on a sunny windowsill.
Posted by Dr. Sarah Cimperman, ND at July 15, 2012 No comments:
Email ThisBlogThis!Share to TwitterShare to FacebookShare to Pinterest

Fish oil helps prevent blood from getting too sticky and forming clots (coagulating), but it doesn’t cause excessive bleeding and studies show that it doesn’t interfere with anti-coagulant medications.

In a randomized, placebo-controlled, double-blind clinical trial (the gold standard), researchers studied the effects of different doses of fish oil in patients taking warfarin, a drug that prevents blood from clotting. In addition to anti-coagulant medication, participants also received either six grams of fish oil, three grams of fish oil, or a placebo every day for four weeks. Researchers monitored clotting time using a test called the International Normalized Ratio or INR and found no difference between any of the groups. The highest dose (six grams per day) had the same effect on blood clotting as no fish oil at all.

Another randomized, placebo-controlled, double-blind study followed patients who took fish oil or a placebo (soybean oil) for five days after major abdominal surgery. Researchers found no difference in bleeding risk between the two groups but there was a difference in the length of hospitalization. People taking fish oil had shorter hospital stays and checked out, on average, almost five days sooner than those taking the placebo.

Fish oil may not cause bleeding but it can prolong bleeding by inhibiting the clotting process. It’s safe to take just after surgery, but you should avoid taking it just before surgery. Stop taking fish oil at least 48 hours before any medical procedure that carries an increased risk of bleeding. If the procedure goes well, you can resume it as soon as your doctor allows. 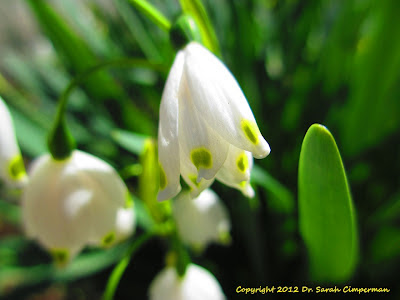 Most commercial herbicides used to kill weeds are toxic, even the ones designed for home use. Fortunately, it's easy to make your own non-toxic version at home using ingredients that you probably already have on hand:

Mix all of the ingredients together until the salt has dissolved. Transfer the mixture to a spray bottle.

Spray the mixture on weeds daily until they die. Two or more applications may be necessary. Take care to NOT spray nearby plants that you do not want to kill.
Posted by Dr. Sarah Cimperman, ND at July 01, 2012 No comments:
Email ThisBlogThis!Share to TwitterShare to FacebookShare to Pinterest
Newer Posts Older Posts Home
Subscribe to: Posts (Atom)