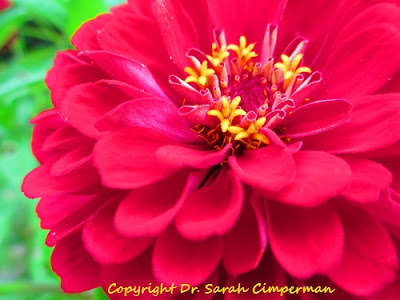 A recent randomized clinical trial compared conventional medical care to a combination of conventional care and naturopathic care for people at risk of developing cardiovascular disease.

Researchers randomly assigned 246 postal workers in Canada between the ages of 25 and 65 into 2 groups and followed them for 10 years, tracking their body weight, waist circumference, cholesterol levels, blood sugar levels, and blood pressure.

During the study, both groups received usual care from their family physicians. In addition, one group received individualized care from licensed naturopathic doctors, seven sessions per year, each one lasting 30 to 60 minutes. The naturopathic care included dietary counseling, lifestyle counseling, and/or the prescription of supplements like omega-3 fatty acids, coenzyme Q10, soluble fiber, and plant sterols.

At the end of the study, those who received naturopathic care had a significantly reduced risk of cardiovascular disease and metabolic syndrome (a cluster of conditions including high blood pressure, high blood sugar, abnormal cholesterol levels, and excess body fat around the waist), compared to those who didn't.

The holistic and integrative approach used by naturopathic doctors is the most effective way to prevent, reverse, and manage cardiovascular disease.

Posted by Dr. Sarah Cimperman, ND at June 30, 2013 No comments:
Email ThisBlogThis!Share to TwitterShare to FacebookShare to Pinterest 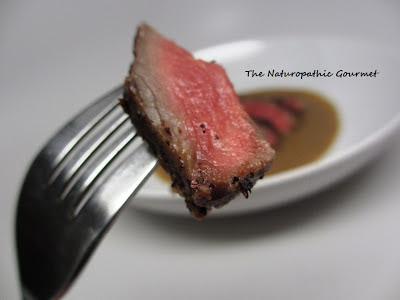 In most cases, the less you cook meat, the healthier it is.

Chicken should always be fully cooked, but duck, lamb, pork, beef, buffalo, and venison don’t need to be.

Cooking meat too much destroys nutrients like vitamins and antioxidants, and damages healthy omega-3 fats.

Cooking meat too much also creates toxic compounds like polycyclic aromatic hydrocarbons (PAHs) and Heterocyclic amines (HCAs). These toxins have been linked to several kinds cancer including tumors of the gastrointestinal tract, lung, liver, skin, prostate, breast and blood (leukemia).

For perfectly done meats, cook them until they reach these internal temperatures:


At temperatures above 170°F, proteins in meat change shape and create new bonds between molecules that make meat tough.

If you need some practice, try this simple recipe for steak with a quick pan sauce:

Posted by Dr. Sarah Cimperman, ND at June 23, 2013 No comments:
Email ThisBlogThis!Share to TwitterShare to FacebookShare to Pinterest

Why Vietnam Sets a Good Example


Vietnam is a vibrant and beautiful country, from the soaring mountains, emerald waters, and majestic limestone islets in the north to the colorful landscapes carpeted with rice paddies and floating markets in the south.

During my recent travels to southeast Asia I was fortunate to spend some time in Vietnam. It's not a surprise that this eastern culture differs drastically from our own in the United States. Yet, we have many things in common. And we also have a few things to learn.

Food in Vietnam was one thing that struck me as different but better. Meals are made mostly of plant foods, including lots of green leafy vegetables like morning glory and bok choy, as well as fresh fruits and even flowers. Many a muggy evening I enjoyed a light and refreshing banana flower salad for dinner.

Also in Vietnamese cuisine, meat is used to flavor dishes but it isn't the main focus of meals. And "meat" may mean any part of an animal: tongue, brain, neck, heart, intestines, or feet. Nothing is wasted.

The Vietnamese also consume creatures at the bottom of the food chain, like snakes, spiders, and crickets. While I was there I ate them too. Snakes and spiders and crickets actually taste good and they're full of vitamins, minerals, protein, and healthy fat. And unlike the prime cuts of CAFO-raised livestock that we eat almost exclusively in the United States, they are a plentiful, affordable, and sustainable food source with a small environmental footprint.

In Vietnam I also observed that everyone is active, from the very young to the very old. Parks and other green spaces were always full of people exercising, even before 6:00 in the morning, and even when it was 90 percent humidity and 95 degrees Fahrenheit. Playing badminton (without a net) was especially popular but people were engaging in all forms of exercise, from stretching and practicing Tai Chi to jogging to performing calisthenics.

Exercise wasn't just common, it was an easy and fun part of everyday life. Simple exercise machines are installed along river walks and lake sides for anyone and everyone to use. And free group exercise classes are offered inside parks, complete with loud, rhythmic music and enthusiastic instructors leading the masses from elevated platforms.

When I happened upon one by accident in the large park across from my hotel, it took me a few moments to understand what was happening, because it's something I had never seen before. What appeared to be hundreds of people of all ages were working out, wearing whatever outfit they happened to have on, wherever they had been sitting before the music started, next to a bench or a blanket full of children, or wherever they could find space when the music drew them in. This kind of exercise wasn't something that had to happen inside a gym or involve special clothing and high-tech gear. It was something to do on the way home, and it was free, fun, and accessible to everyone.

Upon my return to New York City, to fight the jet lag induced by 21 hours of flight time and an 11-hour time difference, I started getting up at sunrise and going outside to expose my skin to early morning sunlight because it stimulates the production of neurotransmitters that help regulate circadian rhythm. Like many Manhattanites who live in apartments and lack for green space, I think of Central Park as my backyard, so that's where I went walking.

Besides myself, there were a handful of other people walking around the Harlem Meer, plus a couple of joggers and a woman doing yoga on the grass. Coming from a culture where parks were overflowing with exercisers first thing in the morning, this one felt empty by comparison, even though it was a beautiful sunny morning, the humidity was low, and the temperature was a comfortable 70 degrees Fahrenheit.

Admittedly, a lack of people in Central park doesn't necessarily mean that no one in New York was exercising. New Yorkers who pay a premium for gym memberships often choose to exercise indoors regardless of the weather conditions. But still, there are 8 million people who live here and only so many gyms. And there are big benefits to being outside.

Studies show that spending time in green spaces can reduce stress, lower blood sugar, diminish pain, improve concentration and immunity, and even have anti-cancer effects. Research has also uncovered benefits of having physical contact with the earth, including a reduced risk of heart attack and stroke, better sleep, and lower levels of inflammation.

If everyone in the United States followed the Vietnamese example of eating more plants and less meat, consuming whole animals as well as creatures low on the food chain, exercising everyday and spending more time outdoors in green spaces, we would undoubtedly be better off. Vietnam sets a good example and we all should take note.
Posted by Dr. Sarah Cimperman, ND at June 16, 2013 No comments:
Email ThisBlogThis!Share to TwitterShare to FacebookShare to Pinterest
Newer Posts Older Posts Home
Subscribe to: Posts (Atom)