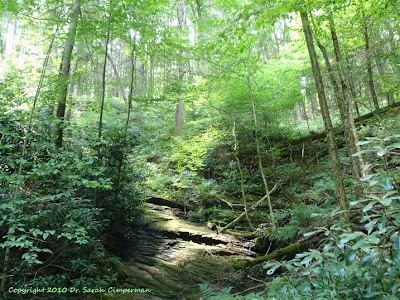 The popular practice of shinrin-yoku in Japan translates to forest bathing, or being surrounded by a forest environment. It may not seem like therapy but forest bathing has been shown to improve mental and physical health. Studies have documented reduced stress, lower blood sugar, better concentration, diminished pain, improved immunity and even anti-cancer effects.

Results have been so impressive that Japanese companies are starting to include forest therapy in employee health care benefits and wellness programs with free check-ups are available inside Japanese forests. A look at the research reveals why a walk in the woods is an unusual but promising prescription.

A recent review of field experiments across Japan compared physical markers of stress in natural environments to those in city settings. 280 adults spent time in forest and urban areas on alternate days. Compared to city environments, forest settings were associated with lower levels of cortisol, slower heart rates, lower blood pressure, greater activity of parasympathetic nerves that promote relaxation, and reduced activity of sympathetic nerves associated with “fight or flight” reactions to stress.

Another study of forest bathing measured fluctuations in salivary amylase, an indicator of changes in sympathetic nervous activity, and also concluded that forests were associated with less environmental stress.

Researchers have studied the psychological effects of forest bathing as well. Almost 500 Japanese adults were surveyed on days they spent time in a forest and also in their normal environment. Statistical analyzes revealed that, compared to their normal environments, inside a forest the participants reported significantly less depression and hostility, and felt significantly more lively. And the greater the level of stress individuals experienced, the greater the positive effects of forest bathing. Researchers concluded that forests are “therapeutic landscapes” and that forest bathing may decrease the risk of stress-related diseases.

Forest therapy may also help control blood sugar. A Japanese study followed 87 adults diagnosed with type-two diabetes for six years. During this time, participants walked in a forest for 3 or 6 kilometers (1.9 or 3.7 miles), depending on their physical ability, on nine different occasions. At the end of the study, researchers found that the forest walkers had lower blood glucose (synonymous with blood sugar), improved insulin sensitivity, and decreased levels of hemoglobin A1c, an indicator of how well blood glucose has been controlled over the past 3 months.

This wasn’t a controlled study and, in general, any form of exercise practiced regularly can help improve blood sugar regulation in people with diabetes. But given the frequency of the walks (only nine times in six years) and the fact that blood sugar levels were significantly decreased but not significantly different between those who walked the long distance and those who walked the short distance, researchers concluded that factors other than exercise also contributed to the positive long-term results, including changes in hormonal secretion and nervous system function associated with blood sugar metabolism.

Research in the United States has investigated the effects of outdoor green spaces on symptoms of attention-deficit/ hyperactivity disorder (ADHD) in children. In a randomized controlled study, doctors specializing in environmental psychology at the University of Illinois studied 17 children diagnosed with ADHD who were exposed to three different environments.

After 20-minute walks in a city park, children experienced substantially improved concentration compared to 20-minute walks in downtown and residential settings. Researchers concluded that the positive results were comparable to the effects of Ritalin.

Researchers at Johns Hopkins University School of Medicine studied the effects of nature scenery and sounds on pain perception. The randomized controlled clinical trial included 120 adults undergoing bone marrow aspiration and biopsy performed with only local anesthetic, a painful procedure, in one of three settings.

One group experienced nature scenery and sounds during the biopsy, the second group city scenery and sounds, and the third group a standard medical setting. Overall, the procedure was poorly tolerated, but researchers concluded that viewing a nature scene and listening to nature sounds is a safe and inexpensive way to reduce pain during bone marrow biopsy.

Studies in Japan have examined markers of immunity in both men and women after three-day trips to the forest. Healthy volunteers participated in three two-hour sessions of walking in a forest. Before, during and after the experiences researchers measured the number and activity of natural killer cells, immune cells that destroy cancerous cells in the body; anti-cancer proteins including perforin, granulysin and granzymes A/B; and levels of stress hormones adrenaline and noradrenaline. They also measured levels of phytonicides in the forest air. (Phytonicides are essential oils released by trees and plants to defend against insects, animals and decomposition.)

Compared to control measurements taken on normal working days, forest walking significantly decreased levels of stress hormones, increased anti-cancer proteins, and increased the number and activity of natural killer cells. 30 days after the experience, natural killer cells were still more active, suggesting that monthly forest walks could be an important lifestyle factor in the prevention of cancer as well as helpful adjunctive therapy for people diagnosed with cancer.

Researchers believed that the wood essential oils were at least partially responsible for the positive effects of forest air. Separate studies have further investigated phytonicides in laboratory settings and confirmed that they can increase anti-cancer proteins and enhance natural killer cell activity.

The therapeutic benefits of forest bathing may be difficult to fully explain. Green scenery, soothing sounds of streams and waterfalls, and natural aromas of wood, plants and flowers in these complex ecosystems likely all play a part. Forest therapy is a good example of how our own health is dependent on the health of our natural environment. It’s also an excellent reason to go for a walk in the woods.

Lechtzin N et al. A randomized trial of nature scenery and sounds versus urban scenery and sounds to reduce pain in adults undergoing bone marrow aspirate and biopsy. The Journal of Alternative and Complementary Medicine. 2010 Sep;16(9):965-72.